CORONAVIRUS
Drivers please be aware, many more people are walking on our roads (at a distance from each other) during these unprecedented times. For everybody's safety would ALL DRIVERS please drive responsibly and adhere to the 20 MPH MAXIMUM speed limit on ALL our roads.

The roads within the maintenance fund are:

The current contributions to the
Badgers Mount Road Maintenance Fund:

Basic for household: £40.00
Additional payment for each regularly used vehicle: £30.00 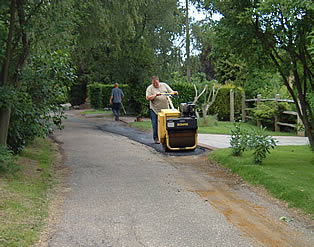 2019 was a relatively quiet year for the Fund. We carried out a number of patching and repairs to Highland Road, Badgers Road and Johnsons Avenue and we organised the improvement works to the entrance of Badgers Road. This work was undertaken for us by KCC Highways who asked us to contribute to the cost which we did and for which we very are grateful to the Residents Association and the Parish Council for sharing the expense with us. We are also currently in discussions with Nesbit House management in the hope that they will sponsor the planting of the verge areas which will make everything look a little tidier and more pleasing to the eye.

There are a couple of areas of work that we had hoped to have carried out during the year but the weather and continued building works have delayed us. These areas include repairs at the top of Milton Avenue where heavy goods vehicles have eroded the edge of the road and the resurfacing of Johnsons Avenue which will be done as soon as we have some better weather.

Road sweeping was carried out twice during the year although on both occasions the day after it was done we experienced some freak weather conditions that slightly spoilt the effort, but nevertheless the roads were still better than before.

Following years of negotiation with KCC Public Rights of Way office and the disgraceful treatment of our roads by Vodafone in 2018, the section of Badgers Road from Highland Road down towards the M25 was finally fully resurfaced This work was carried out by KCC and totally funded from the public purse. Therefore we all indirectly paid for it via our taxes, and Vodafone got away with paying nothing; we didn't even receive an apology from them for the damage and disruption they caused. However, I'm pleased to say that the road surface is now safe to use and our sincere thanks go to KCC for this.

On a couple occasions we discovered our roads had been closed and were being dug up by Thames Water even though they had made no advance reference to us and had been given a licence by KCC Highways who have no jurisdiction over our roads! However, following a number of discussions with all parties, we believe they now have protocols in place to contact us in advance of any works within our roads. On both of these occasions we were able to claim nominal compensation sums from Thames Water. 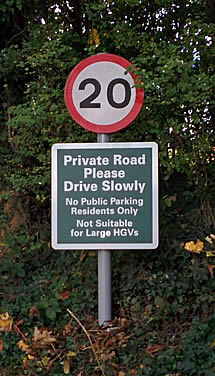 The question of speeding on our roads continues to be an issue. The additional 20 MPH speed signs and the SLOW signs at bends and junctions that were installed have had little or no effect. Regrettably a number of drivers still can't read and although it is predominantly visitors to our hamlet, sadly a number of our own residents still blatantly ignore this safety restriction. Speed bumps have often been suggested as they could possibly assist in reducing the problem, but these aren't a realistic option as they would be subject to a number of regulations and safety requirements, including clear marking and illumination not to mention considerable capital expense and increased insurance costs! It is therefore the Committee's opinion that, whilst not perfect, constant reminders and (hopefully!) use of common sense is the preferred option.

Another safety aspect we instigated in conjunction with the Residents Association involved the removal of a number of dead trees and overhanging dangerous branches along a section of Highland Road near Badgers Mount House. Whilst this work is not within our remit, we felt the safety of the road users would be at risk if nothing was done. Replacement trees are due to be planted within the next few weeks and here also we should like to thank our Parish Council for providing a one off grant towards the overall cost of this work.

We have reported previously that we were looking into the possibility and costs to upgrade the three areas of our roads which are not up to standard. For various reasons this has, and is, taking longer to organise than we had hoped. The early estimates we received were eye watering and alternatives were sought, but after very long delays we were then let down by a contractor not able to quote. Alternative contractors were sought and we now have some slightly less eye watering estimates and have also managed to secure a very small contribution from KCC. The overall costings are now prepared and we will shortly be sending letters to all the affected residents to obtain their views.

Regrettably the Fund continues to be let down by a small number of residents. This year, a total of 30 properties chose not to contribute. This is 25% of the residents on Badgers Mount who, despite using the roads to gain access to their properties, are happy to sit back and let everyone else pay for them to have a smooth ride. We often receive complaints about inconsiderate parking, emails asking what are we doing about this or that, and surprise, surprise, the complaints always seem to come from the non contributors!

Tonight's Agenda includes two proposals which we believe we should attempt to instigate for the safety and well-being of the users of the roads and for maintenance of the roads. We are also proposing that a charge be made to the owners/developers of all major building sites that are accessed from our roads as the continued use of HGVs that accompany these developments cause serious damage to the roads.

We are pleased to confirm that we are not proposing to raise contribution levels for this Financial Year.

I should like to take this opportunity to thank the Road Representatives' Committee for their help throughout the year; I couldn't do this on my own.

On behalf of the Committee, I would also like to thank you for joining us tonight and for continuing to support the Fund.

Early in the 1960s, following the building of some houses and bungalows in Highland Road, a few residents held a meeting to discuss the possibility of funding a scheme to lay a surface to Highland Road. The road then was nothing more than a cart track of flints and large pot holes. Footwear during the winter months was definitely gumboots with thick soles!

The meeting successfully raised a sum of money to make a start on filling pot holes with tarmacadam. Under the name Highland Association, the group called upon all residents in the road to contribute into a fund so that more work could be carried out in successive years.

However, after the worst section of Highland Road had been treated (in 1965), residents in Milton Avenue and Badgers Road were impressed and following a meeting of all residents of the three roads, the Badgers Mount Road Maintenance Fund was born. Johnsons Avenue joined the fund on the 1st January 1988.

Please visit these local businesses who support this website.